Robots are so present around us today that it is legitimate to ask the question. Thanks to advances in artificial intelligence, autonomous machines can recognize images, text, speech, take orders, educate customers, etc., and in this way they can take on many tasks generally entrusted to humans. Companies have been integrating machines into their workforce for several years. And for good reason: robots are fast, inexhaustible, and never complain! And according to a Bloomberg article, the pandemic and the ensuing labor shortages are now leading companies to increasingly turn to robots.

A recent Federal Reserve survey found that about a third of American companies facing hiring challenges are implementing or exploring automation to replace workers. David Zapico, CEO of the robotics company Ametek Inc., which makes automation equipment for industrial companies, confirms that his business is currently up and running. “People want to suppress work,” he said. Executives at Domino’s Pizza and Hormel Foods Corp have also told Bloomberg that they are investing in automation to lower labor costs.

We recently talked about the fact that McDonald’s has partnered with IBM to replace drive employees with artificial intelligence, a strategy that would allow the chain’s restaurants to downsize. The famous robot dogs from Boston Dynamics, already heavily involved in the US military and law enforcement, can also handle certain agricultural tasks or play the role of sheepdogs. In another record, they allow the progress of construction works to be tracked and have made it possible to assess radiation levels within the former Chernobyl nuclear power plant. What do all these automated tasks have in common? Its painful and / or dangerous nature.

Workers “with little education”, the first victims of automation

Robotics has also conquered the private sphere: robot vacuum cleaners, robot glass cleaners, robot lawn mowers, robot cleaners, there are many other gadgets that prevent us from committing ourselves to these repetitive, painful and dreary tasks. Therefore, at first glance, one might be glad that machines take over these tasks instead of human beings, especially when they make it possible to preserve the health and safety of employees. The latest example: the Ozmo robot, developed by Skyline Robotics, designed to polish the windows of buildings in New York, thus preventing human beings from taking risks.

The problem is that many of these routine manual tasks are occupied by people who have not been able to access more “satisfactory” jobs, due to lack of opportunities in an increasingly narrow labor market, or more simply due to lack. interesting or “responsible” positions. As a result, if the trend continues, job vacancies will be even scarcer, “inequalities will increase and the prospects for many low-educated workers will not be very good,” warns Daron Acemoglu, an economist at MIT.

“Brain Corp imagines a world where everyone’s life will be safer, easier and more rewarding thanks to robots. These robots will be as common today as computers and mobile phones ”, are the words of Eugène Izhikevich, co-founder and CEO of Brain Corp, a company specialized in designing robots to perform“ boring, boring ”tasks. Dirty or dangerous ”. (according to the company’s website). Equipped with internal AI, BrainOS, its autonomous mobile robots (AMR), are able to evolve in contact with the public, avoid obstacles and adapt to the evolution of their environment. More than 16,000 of these robots are currently deployed; They clean floors, deliver merchandise, or scan store shelves to check inventory. To date, they have thus accumulated the equivalent of 6.8 million hours of work. And the CEO is delighted to now cover “100 billion square feet” with his fleet of robots. 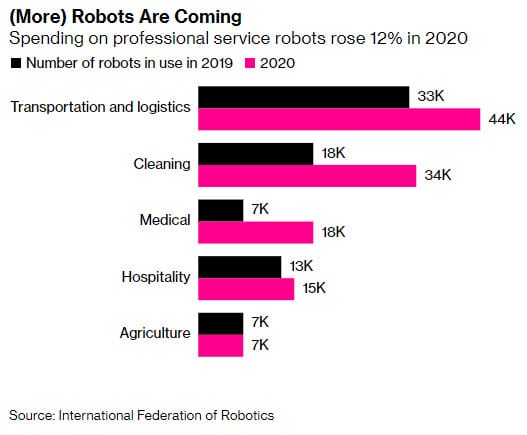 Number of robots used in different industries in the United States, in 2019 and 2020 © International Federation of Robotics.

The antimicrobial resistance market had increased by 27% in 2019. Although the pandemic slowed the sector in the first half of 2020, the use of automated robotics increased considerably from October 2020 to October 2021, and this, in various industrial sectors. , particularly in hospitals (+ 2500%) and education (+ 426%). This massive adoption of automation is said to be due to the combination of three criteria: a changing labor economy, the pressure of the pandemic, and the progress made in AI.

One in ten jobs threatened by robotization?

In the early 2000s, the deployment of self-service checkouts in French stores, as in the rest of Europe, generated a wave of concern among employees, who immediately felt threatened. Twenty years later, it is clear that these automatic payments are very popular with consumers because of the time savings they provide; as these facilities are generally reserved for a limited number of items, the tellers, for their part, are fortunately still there. However, the recent entry of Amazon Go stores (a cashless store concept) on European soil, in the United Kingdom, raises new fears: is this profession finally doomed to disappear, like so many others?

A study by researchers at the Oxford Martin School, published in 2013, estimated that 47% of jobs were at risk of being replaced by robots and artificial intelligence in the United States within 20 years. An OECD survey, carried out in 2016, estimated that “only” one in ten jobs would be threatened by robotization in the most industrialized countries. But who can predict what will be technically automatable? », Underlines Gregory Verdugo, researcher at the Sorbonne Center for Economics, for whom these figures have no meaning. 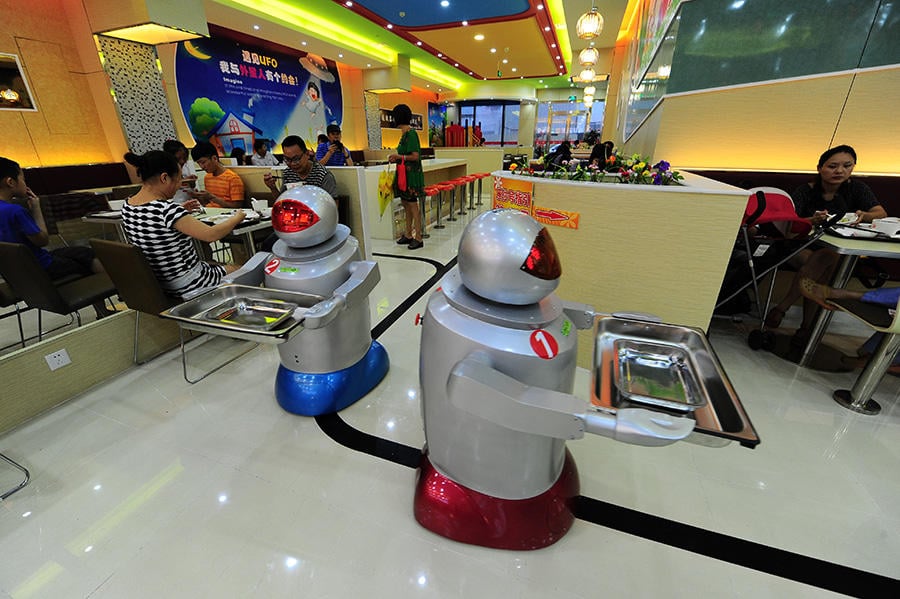 “The funny thing is that everyone believes that they cannot be replaced by a vulgar machine, but I think that in the long run, we will all end up going through it,” argues Serge Abiteboul, a researcher at the Department of Informatics at the École normale supérieure, when he mentions the fact that much of scientific research is now entrusted to artificial intelligence. Because the tasks considered more “cognitive” and less routine are also beginning to be replaced little by little by AI: translation of texts, financial advice, script writing, graphic arts, etc.

No phenomenon of communicating vessels between lost and created jobs

Today, almost any task can be automated and no longer just so-called repetitive tasks. For the economist Gilles Saint-Paul, any task can be broken down into a series of actions to be strictly performed. “The process is redesigned so that non-routine tasks are replaced by routine tasks that can be automated. […] Once you understand a task, everything can become routine, ”he says.

Companies are using automation to increase their productivity. But watch out for shortcuts – automation doesn’t necessarily kill jobs. According to the spill theory, established by the French economist Alfred Sauvy in the 1980s, technological progress leads to better productivity, which drives down the prices of certain products, which causes an increase in consumption, which generates its shift of new jobs to manufacture them. “The switch from horse to car has put drivers out of work, but it has also created an entire automobile industry. […] There is no economic model that guarantees this, but until now technological innovation has never killed jobs, ”said Gregory Verdugo.

For example, a November 2020 Statistics Canada report shows that Canadian companies that employ robots have also hired more human workers (15% more). Not to mention that it will necessarily take a few humans to supervise the work of the robots, if only for ethical and legal or moral responsibilities, even if, in the long run, “we will be closer to a human. For 500 machines”, esteemed Gilles Saint-Paul.

That being said, as the OECD report emphasizes, there is no “communicating vessel” phenomenon between the jobs lost to automation and the jobs that will eventually be created: the skills needed to exercise some and all, others are very different! “Years of business knowledge accumulated by experienced employees may suddenly not be of much interest, as soon as the machine takes over routine tasks. […] The reconversion of personnel sanctioned by the robotic revolution into new jobs in the digital economy will not be easy ”, concludes an informative report prepared on behalf of the Senate delegation for prospective studies in 2019. It is important to highlight that this risk of“ Disqualification ”Of people also refers to highly qualified jobs today (radiologists, airplane pilots, etc.). The point is, if automation doesn’t kill jobs, it will only increase inequality over and over again.