As the release of Windows 11 version 22H2 approaches, Microsoft is releasing “guided simulations” of the latest version of Windows to help organizations and employees who are hesitant to move from stable Windows 10 to the next version.

Windows 11 may be the future of the operating system, but we must admit that so far its adoption has been rather slow. This is a good thing as Microsoft will support Windows 10 until October 2025. But Microsoft is trying to convince enterprise customers that Windows 11’s security improvements are worth it if their hardware meets the minimum requirements.

For IT Professionals and End Users

In this way, “simulating Windows 11 with managed features” shows IT professionals and end users how similar Windows 11 is to Windows 10 and models how Microsoft deployed Windows 11 to its users.

“They say a picture is worth a thousand words, so we’ve created step-by-step simulations of Windows 11 features to help you IT pros see the similarities to Windows 10 and show you how familiar the experience is,” Microsoft’s blog post reads.

These are interactive simulations that show IT and staff “a real-world experience with Windows 11 and Microsoft’s cloud management tools.”

Users might expect employees of the fictional 100,000-employee multinational company Contoso to integrate Windows 11 into their regular hybrid workday, such as using Microsoft’s iPhone printing software.

The simulations have Megan, an end user, and Allan, an IT professional.

Windows 11 version 21H2 was released in October 2021 and was scheduled to be “widely deployed” in May, meaning that Microsoft believed Windows 11 was stable enough for enterprise customers to deploy three months ago. Windows 11 22H2 is expected to be released around October, and Microsoft hopes its simulation will bolster the readiness of enterprise IT departments to deploy it.

The first simulation, Getting to Know Windows 11, is for end users, and the other three are for IT professionals.

The End User Simulation consists of 13 pages showcasing key Windows 10-Windows 11 features and changes that Microsoft has been testing as part of the Windows Insider Program through the Dev and Beta channels since October, including the Start Menu, Taskbar, Settings app, and special abilities. .

The simulation also introduces users to Windows Hello for corporate passwordless login and then transitions to the Windows 11 desktop at work,” the simulation says.

“Start is in the center of the taskbar and Megan can easily quickly find what she needs,” Microsoft adds, then she heads to the taskbar to select Start, which brings up the new Start menu from Windows 11, aligned center, above. task bar.

Simulations for administrators also include: getting familiar with managing Universal Print printers; switch from Windows 10 to Windows 11; and deploy Windows 11 with Autopilot. 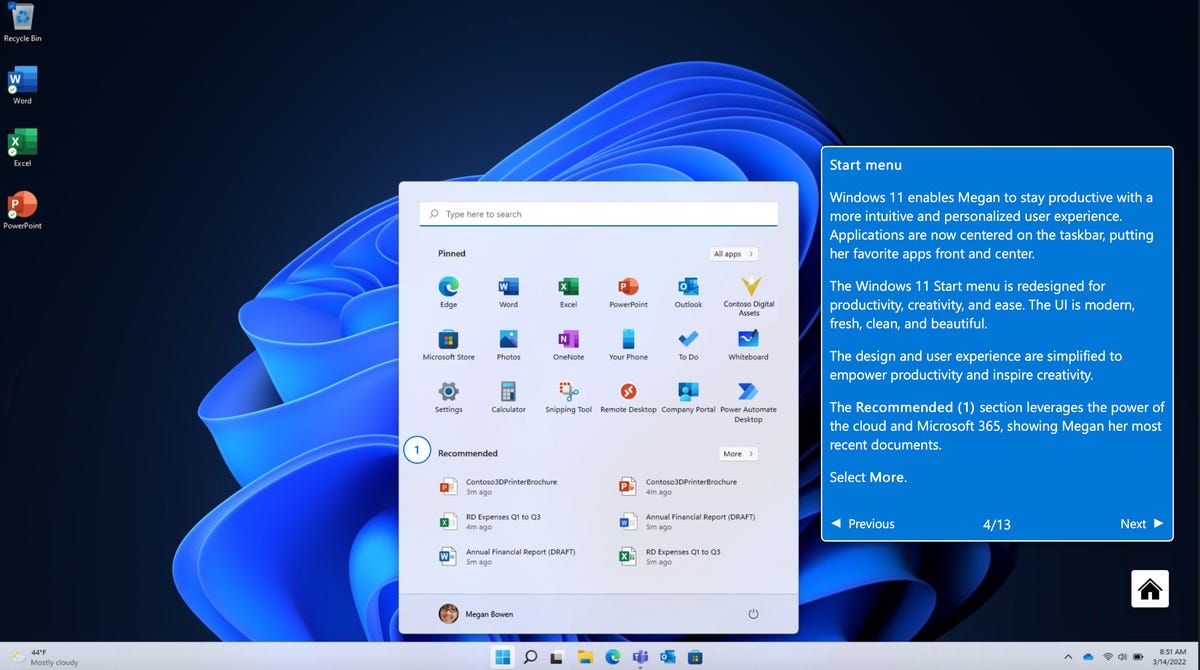