Video games are no longer a passion that only affects rebellious teenagers. Today, everyone likes to be with the controller in their hand, for a game with friends or for several hours. Internet operators Orange and SFR take this into account, and their box gaming offers are designed to meet the expectations of all gamers. With cloud gaming, several hundred video games become unlimited on TV screens, smartphones and PCs. The streaming game allows you to play instantly without having to start a download. An argument that will appeal to the most impatient players. No more hours of waiting for an update, and congested internet connection. In addition, such an option allows you to play a whole myriad of titles by paying a single price.

With the SFR gaming option, any customer with an SFR internet box can access more than 300 streaming video games for € 14.99 / month. One month is offered for new subscribers, and it’s a no-obligation option. And this Gaming Pass is designed for the whole family since it includes parental controls on the content accessible to children, and allows them to set limits on their daily playing time.

The first month is free to try cloud gaming with SFR

What will please with this gaming pass:

To fully enjoy all video games, it is important to have a connection to the height. With SFR, prices currently start at 16 € / month for the first year. At this price, we have access to a speed which can reach 1 Gbit / s in downstream speed and 500 Mbit / s in upstream speed. The box gaming offer includes 160 TV channels and unlimited calls to landlines in France and over 100 other countries. For 29 € / month for one year, the same offer adds the SFR Box 8 which works in WiFi 6.

With SFR fiber power offers, we are moving up a gear. The optimal downlink speed reaches 2 Gb / s, for the upstream speed it is always 500 Mb / s. There are 200 TV channels, and calls are unlimited to French mobiles in addition to landlines. For this subscription with the SFR Box 7, we will count 22 € / month for the first 12 months. With the SFR Box 8, the price is 35 € / month for 1 year.

With such gaming boxes, the Gaming Pass may not be enough. Other possibilities are available to gamers thanks to the Connect TV decoder which can run Android applications. Platforms like Google stadia or Apple arcade offer their own catalog of video games in Cloud gaming. Another option, go through the Steam Link application which gives access to all the games already available on PC. For those who prefer, for example, the essential Fortnite, offered by the Epic Game Store, it is also possible to go through the Steam app although the two are competing.

Orange provides unlimited access to 250 video games on all screens

The Orange video game pass is also at € 14.99 / month without obligation. The first month is free, but it’s an Orange Good Plan that won’t last forever. One more time, all subscribers can subscribe to this option. The gaming pass promises access to 250 video games, which is less than its competitor SFR. On the other hand, it has the advantage of offer multi-screen. In other words, you can continue your games from one screen to another, TV like PC and smartphones. 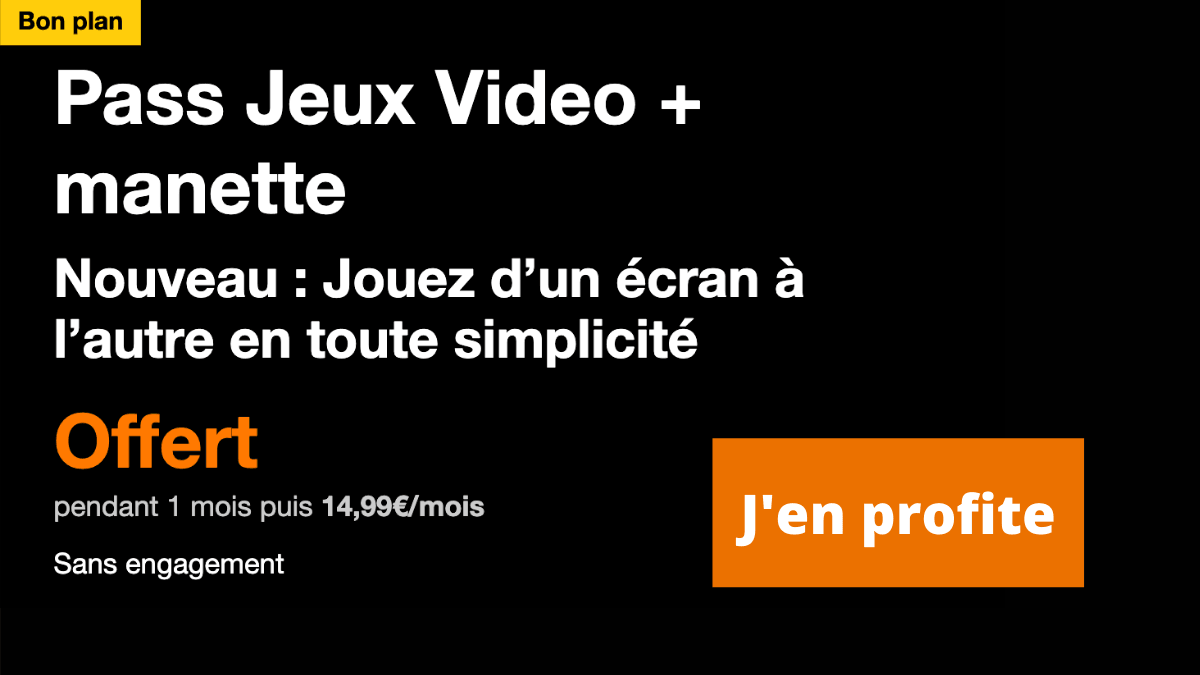 The Orange video game pass is available on all media.

A Gaming Pass cannot do without a box to play in the right conditions. You have to be sure that his ping is satisfactory by comparing the bit rates of the fiber boxes. To find your way around, it will be best to first learn about the different terms, such as bits, bytes and bytes. Once you know what you are looking for, all that remains is to look at the box offers for the Orange game.

The operator offers internet boxes from € 22.99 / month. For this first price, the theoretical downstream speed is 400 Mbit / s, the same for the upstream speed. Calls to landlines are unlimited. The decoder is included with 140 TV channels via the Ultra HD 4K decoder. Perfect for admiring the graphics of the most beautiful video games.

With the subscription at € 29.99 / month, we switch to a fiber box with an optimal downstream speed of 2 Gbit / s shared (1 Gbit / s per device), and 600 Mbit / s upstream. In addition to this connection, unlimited calls to landlines and mobiles from France, DOM, EU, USA and Canada. But also a WiFi repeater 6 to extend coverage to the whole house, a second 4K decoder on demand, and 100 hours of program recordings.

Finally, the limited-edition offer at € 39.99 / month for one year goes all the way. By taking the characteristics of the box gaming above, it adds a Netflix subscription and access to 4 OCS TV channels. If such speeds still do not allow a high enough ping for the most demanding video games, there is always the possibility of improving its internet speed.

The advantages of the box for the Orange game: