In 1993, the X-Men were at their best. Proof of this is the X-men game on MegaDrive, which is definitely one of the best mutant games.

What could be better for comic book fans than the 90s? Spawn was shuffling comic book cards, Frank Miller was shaking the crowd with Sin City, and the X-Men haven’t yet worn The Matrix-inspired black leather outfits. Mutants knew their finest hour when Jim Lee appeared in the series, and new characters appeared who became instant favorites of the public, such as Jubilee, Gambit, Bishop or Cable.

Such was the enthusiasm that Marvel decided to adapt the mutant adventures into a series for immediate success. Developed for Fox Kids in the US, the series was heavily inspired by the comic book aesthetic of Jim Lee and Chris Claremont, while at the same time building on a script laid out by Stan Lee and Jack Kirby. After comics and television, all that remained was to conquer video games for the X-Men to become the kings of media.

Mutants have made their way into video games several times already, but without much success with pure exploitation products: the hideously ugly The Uncanny X-Men, the botched point’n’click X-Men: Madness in Murderworld, the beat’em’up mou X-men arcade game or the lame X-Men II: The Fall of the Mutants, a playful simmer that combines baffling adventure and soft action.

To restore the colorful image of the X-Men video game in spandex, Marvel decided to join forces with Sega and Western Technologies to release a console-exclusive game that was then a hit in the United States: the Sega MegaDrive. And serving hot soup to fans was out of the question for the occasion: Sega and Marvel were going to create one of the best games in history under the X-Men license.

Days of Future Past

To avoid disappointing fans, the equation was simple: put everything that makes up the show’s spice into the game, stick to the letter of the mutant dress code, and shake it all up in an action-platformer shaker. With esthete Ed Annunziata (Ecco the dolphin, Hummingbird, Mr. Bones) at the helm, the title was in safe hands. Annunziata collaborated with Western Technologies to make the game as beautiful as possible so that fans feel like they are playing an interactive episode of an animated series.

For the formula to come first, the script at all costs had to be more than a pretext. After many trials, the decision is made to place the action in the Danger Room, Professor Xavier’s famous creation based on Shi’Ar technology, which allows mutants to train in extreme environments where injuries are real. The room was broken into by Magneto and, lo and behold, a group of four mutants, Wolverine, Gambit, Cyclops, and Nightcrawler (Diablo) were stuck in a room that would have Jigsaw paraphernalia look like a kindergarten. 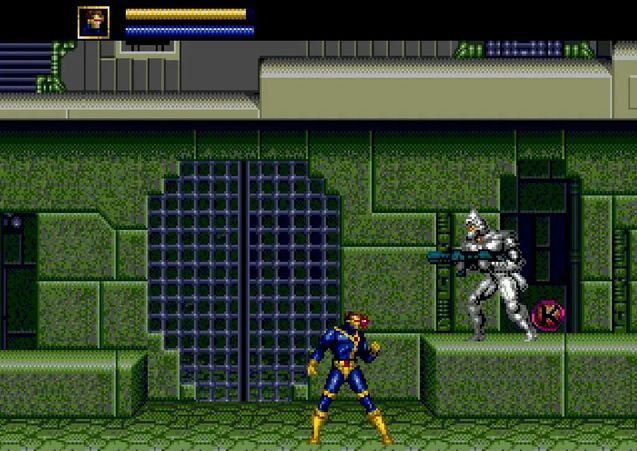 Each hero has unique abilities: Wolverine shreds everything in his path, Cyclops uses his optic beams to destroy enemies from a distance, Gambit sends out his cards charged with kinetic energy, and Diablo can teleport through levels, which is ideal for speedruns. The gameplay was not limited to advancing through the level to kill robots, monsters and mutants of the wild land.

In the great tradition of Sega, levels were non-linear, and it was imperative to explore the nooks and crannies of the stages to see their end. With clever level design and some well thought out puzzles, often based on switches to find and activate to open previously blocked passages, the title was in keeping with the action platformers of the early 90s. but terribly effective.

Fan service is not forgotten, far from it: there are iconic comic book villains with the hyper-charismatic Magneto at the top of the list, as well as Apocalypse in his legendary blue hues, which grows as the fight drags on. Juggernaut (Scourge), who rushes headlong at the heroes, and the terrible Mojo, the incredible illegitimate son of Krang from Teenage Mutant Ninja Turtles and Spawn the Clown. 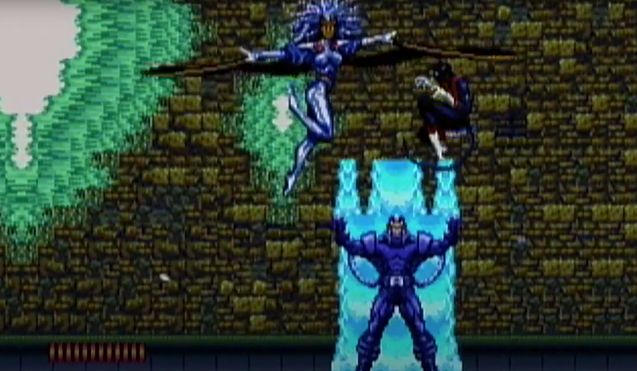 He’s still smaller than in the comics

The X-Men were not satisfied with the minimal maintenance of the 90s platformer, but brought their share of long-awaited new products. The ability to change characters on the fly was unprecedented and allowed real-time selection of the character best suited to the situation. Diablo to cross levels as fast as possible, then Cyclops or Gambit to defeat opponents from a distance, and finally Wolverine against bosses and masses has been said.

Added to this was the ability to summon secondary heroes, a system that would be explored in the X-Men VS Street Fighter and Marvel VS Capcom fighting game saga. Just by going through the menu, Storm, Angel (in the form of an Archangel), Iceman and Rogue (Malicia) come to help the hero. If Storm, Angel, and Rogue have offensive abilities, Iceman intervenes by creating an ice bridge to cross some of the platform’s difficult passages. 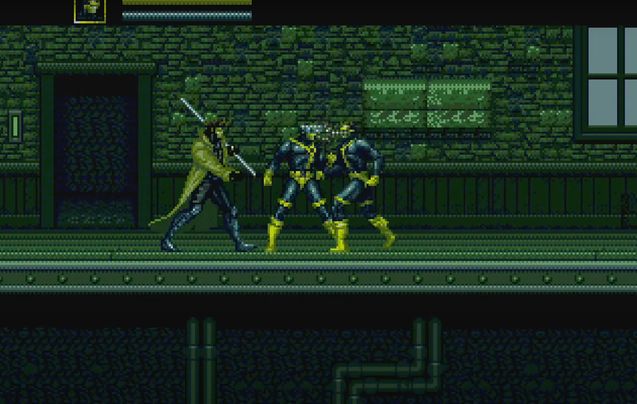 Mandatory walkthrough of the battle with the clones

The X-Men game left behind a find that went down in JV history: the Reset Mojo Crunch case. Contextualization is needed. Remember that in 1993, without the Internet and social media, when players were faced with a mystery, their only recourse was to share their problems or invest in game solution magazines.

On the fifth level, the X-Men encountered Mojo, an invertebrate with mechanical legs. A wizard by trade, obsessed with earthly TV shows, he lured mutants into a trap in his high-tech stronghold. After long minutes of traversing platforms separated by pillars of fire and Mojo appearing grinning at the cathode screens, the player is finally in front of the computer.

In order to complete the level, you must restart your computer terminal. Here’s the problem: nothing explains how to do it, except for Professor Xavier’s suggestion: “Restart your computer now!”. Destroying it won’t end the level, so we might be stuck in Mojo ad vitam æternam… Solution: Press the Reset button on the console. A mystery of genius that will drive an entire generation of gamers crazy.

Despite this little “troll” before the term was coined, the success was mostly there, so much so that Sega and Marvel brought back the cover in 1995 for X-Men 2: Clone Wars. Once again developed under the direction of Ed Annunziata, the game will use the concept of the first X-Men game, greatly improving the title’s graphics and animations.

Always hungry for novelty, Annunziata will create an intro for this second part that will remain in the annals, in the form of a snowy prologue that can be played as soon as the console is turned on, even before the title screen. Four heroes from the first part returned, as well as Psylocke and Le Fauve. Cherry on the cake: even Magneto was playable after completing the third level. 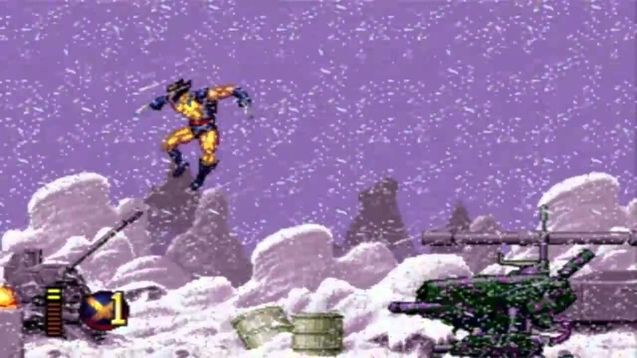 And again there was a success of the public and critics. But no matter what, no sequel worthy of the name will take over. The X-Men will shine in the arcades with the X-men VS Street Fighter action saga. The world of X-men 3 subtitled Mojo was still made in 1996 on the Game Gear and on the now long-dead Master System, but its poor quality made it a forgotten title.

Ed Annunziata wanted to propose a truly new project after X-Men 2: The Clone Wars, which would have an all-female team. Seriously titled X-Women, it could have ended the X-Men trilogy in style. However, all hope is not lost as the producer does not despair after seeing the mutants return to a completely different environment, Intellivision Amico:

“A long time ago I pitched Marvel X-Women as the third X-Men game for the Sega Genesis. Unfortunately it never saw the light of day (I left the company), but I’m currently trying to convince Tommy Tallarico to support the game for the new Intellivision Amico.”

In anticipation of the hypothetical real-life X-Men 3 developed by Annunziata, mutants will return this year in Marvel’s Midnight Suns, a turn-based tactical RPG created by Firaxis Games, creators of the iconic X-Com. With a script inspired by the Rise of the Midnight Sons arc and Jake Solomon holding the reins of the project like Jean Grey’s phoenix, he could very well have signed the resurrection of the X-Men on consoles and PC.