Initially sold at a price of € 499, the “yeedi vac station” set including the yeedi vac max robot vacuum and a recovery station is being offered at € 399 at the time of writing, which makes it a very attractive for promises. Offered. But are they really held back?

A full range of accessories

Like the Yeedi 2 Hybrid, the Yeedi Vax Mac robot has the same charm, with its white plastic finish and similar features. Side accessories, it incorporates a main bi-material brush, a 430 ml dust container in the front and a 240 ml water tank in the rear, but differs from the Yeedi 2 hybrid by a single side brush (compared to 2 for his older brother) . Also included in the box: the charging station with cable holder, 1 reusable mop, 5 disposable mops, and an English user manual.

As the yeedi vac max can be sold alone, the dust collection station (adapted to the robot) is delivered in a second box that includes the station with cable management, 2 dust collection bags and an access ramp for the robot . Quite narrow compared to the competition, the station nevertheless occupies an important place due to its access ramp, with a footprint of almost 30 cm. Better to have space to install it. 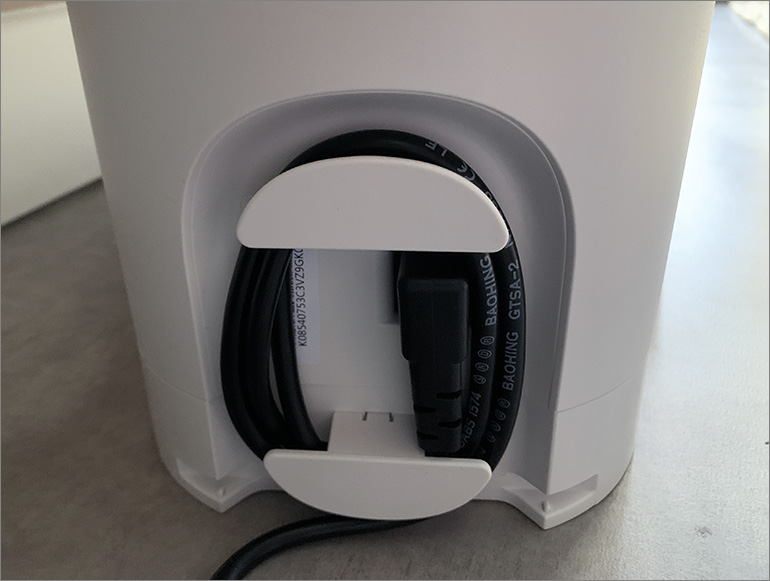 At the top of the device, there is a single home button and a Visual-SLAM optical camera for navigation, allowing it to be less tall (7.4 cm) than models with a laser rangefinder. This navigation system, which we have already tested with the Yeedi 2 hybrid, uses the roofs to repair itself and manage its cartography. 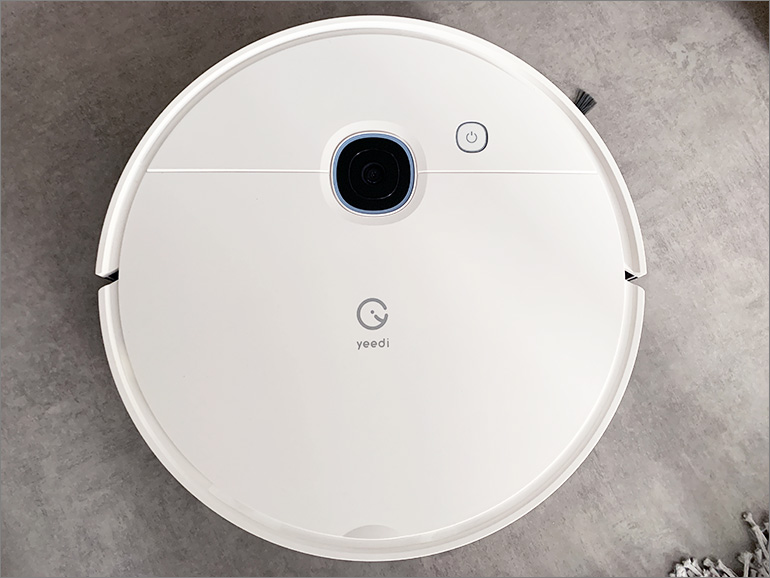 Under the hood, there is still a power button that needs to be activated to start setup and a reset button that allows for smartphone pairing. As usual, yeedi has also provided a location for the cleaning tool that makes it easy to find. 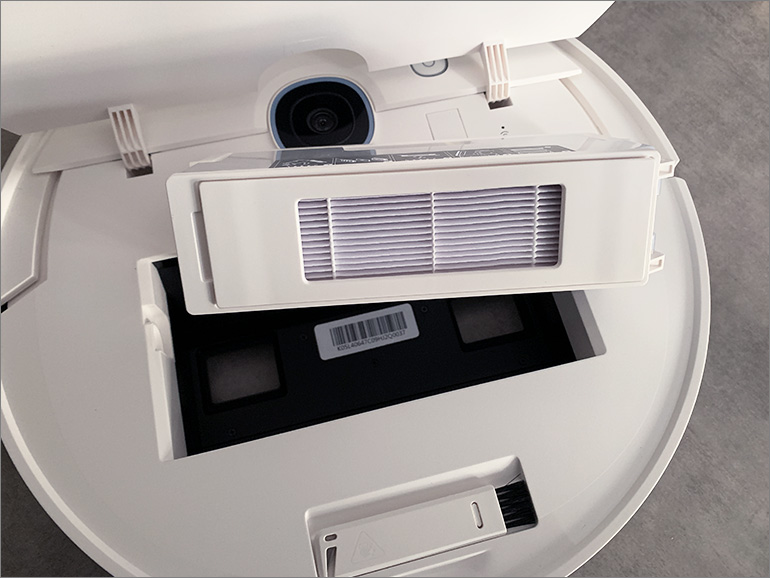 Under the device, 2 large wheels that adhere well to the ground and climb the feet of the luminaire up to 9 mm, a directional wheel at the front, a main brush and a side brush on the right. Yeedi has also provided 6 anti-fall sensors, to exclude any risk of falling down a ladder. 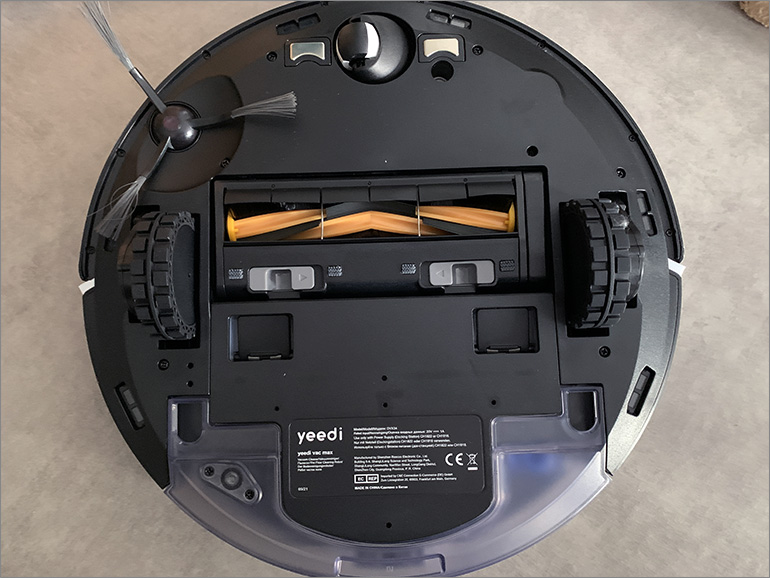 The hardest part will be finding a large enough place to install it. But in terms of setup, nothing could be easier. Compatible with iOS and Android, the application can be downloaded by scanning the QR code present under the hood of the robot. In less than 5 minutes, we downloaded the application and connected the robot to the home network. All steps are clearly explained, although some are still displayed in English (a bug the manufacturer has not fixed yet). 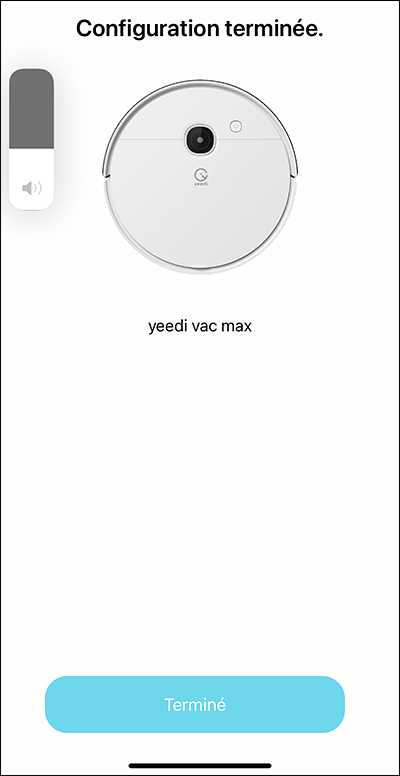 An application that gets to the point

As for the other models of the Chinese manufacturer, the application is clear and allows you to get to the point. Even the most hermetic to the connected objects will have no difficulty in appropriating the correct functioning of the robot.

In this way it is possible to opt for the complete cleaning of the home, by room, or in a specific area. The suction level can also be adjusted in 3 levels, as can the water flow, which can be adjusted in 4 levels. 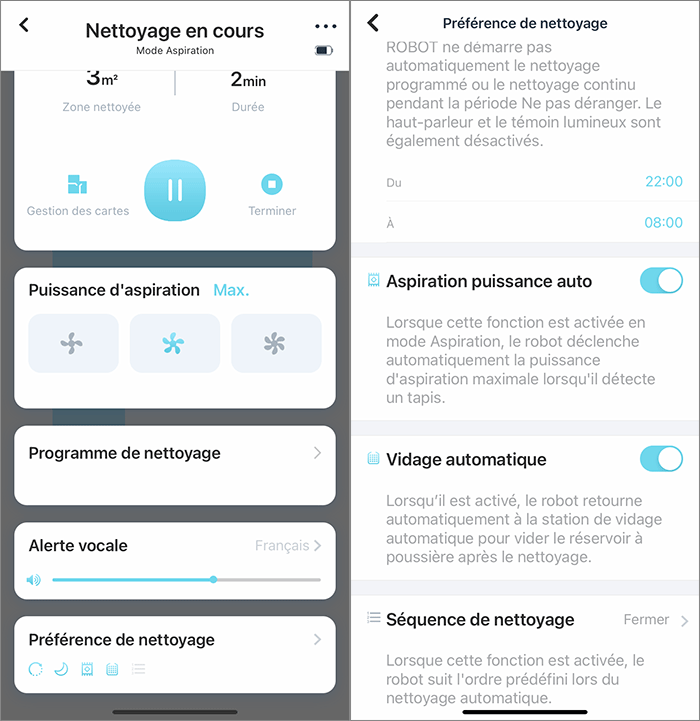 On the home page, you can access cleaning history, vacuum schedule, volume of voice alerts (available in multiple languages, including French), and cleaning preferences, including “Do Not Disturb” mode and the “Continuous Cleaning”. feature that allows the robot to resume the cleaning cycle where it left off when charging is required.

The user can also access the service life of the accessories (side brush, main brush and filter) and can easily identify parts and create virtual limits that should not be crossed.

Navigation that improves over time

As is often the case with models with an optical camera, the first movements are a bit slow and disorganized and sometimes even a bit abrupt with obstacles. But after 4 passages, we noticed a real improvement. The movements are faster and more regular and the obstacles meticulously overcome. Visual-SLAM technology is still slow in dimly lit rooms, but cleaning is done in full.

The mapping created after a few passages is clear and even more accurate than with the Yeedi 2 hybrid. This time, all parts have been correctly identified. A good point since the application does not allow partitioning of rooms.

The management of skirting boards and curtains was not a problem and the passage over short or long pile carpets is a formality. Regarding the return to the base, same observation: the robot had difficulties to find its way the first times, but after several passages, it is done without any difficulty.

An aspiration to the grain

The quality of the suction is undoubtedly the strong point of the yeedi vac max. With its 3 suction powers (Standard, Max, Max +), it effectively collects dust and its silicone and synthetic fiber brush guarantees perfect dirt recovery. A bit noisy in Max + power, the sound level is nevertheless very comfortable, even very quiet in standard mode.

Another good point for the vac max, this model adapts its suction power to the carpets it detects, for even more efficient cleaning.

Regarding autonomy, the manufacturer announces 3:20 to clean an area of ​​approximately 180 m², which is more than enough. The dust bin capacity may seem a bit tight, but this is where the automatic dump station really makes sense.

Although cumbersome on the ground, the collection station avoids emptying the dust bin after each step and this is a real advantage for a device designed for everyday use. A relatively noisy operation, which takes about fifteen seconds, but avoids manipulation to empty the dust bin. 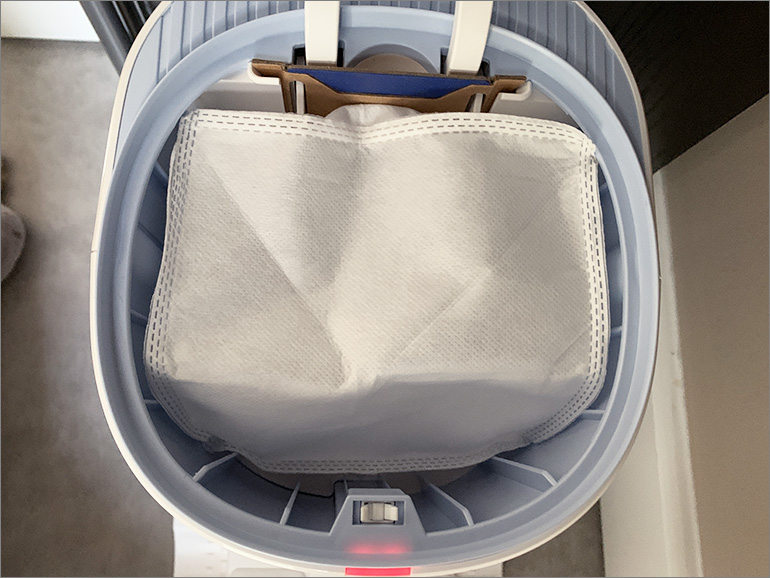 A wash function for reviewing

If the scrubbing function had seduced us in the Yeedi 2 hybrid, here it is less effective and seems anecdotal. We always appreciate the possibility of using the mop alone or simultaneously with vacuuming, but the quality of the wash is not fully developed despite the 4-level adjustable water flow. 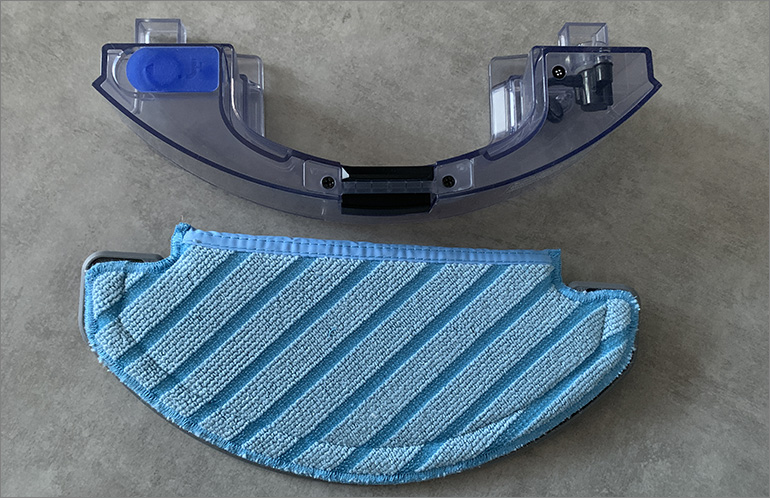 However, it has an added advantage with the automatic detection of carpets to prevent them from getting wet. But this time, the mop doesn’t touch the floor properly and cleans rather roughly. If the house is not too dirty, this wash will suffice, but for embedded stains it is better to opt for cleaning by hand.

If you are looking for a model that washes efficiently, some models like the Roborock S7 or l’Ecovacs Deebot T9 + They will suit you better, but they are also more expensive. As an alternative we can also mention the Proscenic M8 Pro that does it as well as the Yeedi but with a different design if this is an important point for you.

Despite some shortcomings in terms of washing, the yeedi vac max and its automatic emptying station nevertheless constitute a very practical 3-in-1 set for daily fireplace maintenance. Very easy to use and complete in terms of functionalities, you will hardly find it cheaper to date.