Global economic conditions, combined with weaker consumer demand, will cause a further contraction in 2023 as the buying spree of the past two years subsides.

A further contraction is also expected in 2023 as consumer demand has slowed, demand from the education sector has been largely met and business demand has been pushed back due to deteriorating macroeconomic conditions.

The combined PC and tablet market is expected to contract by 2.6% in 2023.

“As headwinds in the economy pick up, we expect deteriorating consumer sentiment will further shrink the consumer market over the next six quarters,” said Lynn Huang, vice president of device and display research at IDC.

The combined PC and tablet market is expected to contract by 2.6% in 2023 before returning to growth in 2024. 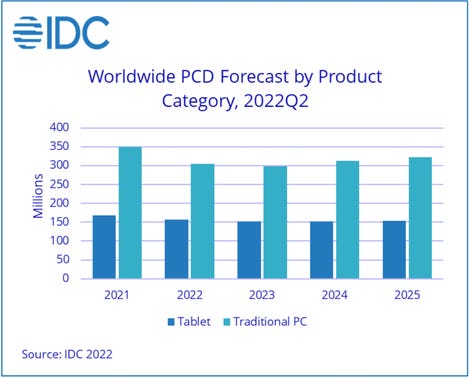 Despite reduced demand, overall supply forecast remains above pre-pandemic levels. The long-term outlook also looks positive as demand for PCs and tablets may be stable.

“Long-term demand will be driven by a slow economic recovery coupled with businesses upgrading hardware as support for Windows 10 ends,” said Jitesh Ubrani, director of research at IDC Mobility and Consumer Device Trackers. “Educational rollouts and hybrid work should also form the basis for scaling up. Support for Windows 10 will end in October 2025, so companies still have plenty of time to implement their plans.

“The recovery of the economy towards the next major renewal cycle could support some growth in the coming years of our forecast. Although volumes are not reaching the peak of the pandemic, we expect the consumer market to move towards more expensive market segments,” explained Lynn Huang.