At Apple’s Far Out event this week, it’s almost certain that Apple will unveil a new quartet of iPhones – the 6.1-inch iPhone 14 and iPhone 14 Pro, as well as the iPhone 14 Max (or Plus) and the 6.7-inch iPhone 14 Pro Max. . Apple hopes that all of these devices will bring enough improvements to please those with the money.

After 15 years of existence (the first iPhone was released in June 2007), one would expect the annual movement of the iPhone to slow down, at least a little.

But what I find remarkable is that there is no indication that this is happening. If you’re not sure, Counterpoint Research just released some remarkable numbers: Apple shipped 237.9 million iPhones last year, a record. 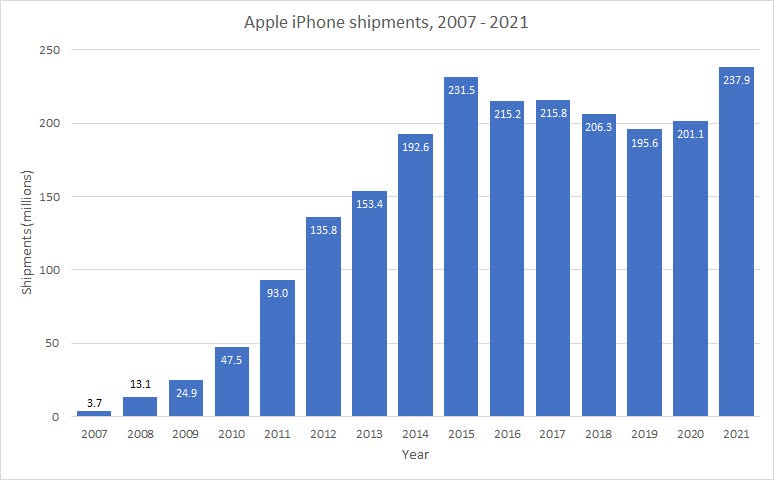 The iPhone now accounts for more than half of all smartphones in use.

The iPhone 13 Pro and Pro Max took the top two spots on the list of best-selling smartphones in the US (and Apple owns three of the top five spots, including the iPhone 12). The iPhone share of new sales peaked at 22% in the last quarter of 2021.

But there is another data point that I think is even more interesting and perhaps points to Apple’s true strength. Strikingly, although the iPhone is positioned as a premium product, it has recently captured 50% of the market in the United States.

In other words, according to Counterpoint data provided by the Financial Times, the iPhone now accounts for more than half of all smartphones in use in the United States.

This installed base mostly consists of used smartphones.

It’s not just about flashy new models: this vast installed base includes old, beat-up but still-working phones, as well as devices that have been passed from early adopters to others after they bought the new version.

In short, this installed base mostly consists of used smartphones.

According to a recent study by CCS Insight, 1.3 billion smartphones will fail in 2022. Half of them will be put away in the drawers of the table or thrown away. But more and more will be resold in the secondary market. And the Apple iPhone makes up over 80% of that circular economy, thanks in part to what CSS calls the iPhone’s “high residual value.”

“Many smartphones from other brands are of limited value and are often thrown away or given to family members,” notes the research firm.

This used marketplace effectively creates another affordable entry into the Apple ecosystem for people who might otherwise buy a mid-range Android phone. And that’s good news for Apple, which is making more and more money from services and hardware (and more profitably). This is partly due to Apple’s policy of supporting its phones with software updates for several years, which means that even phones five or six years old can still be viable devices, at least for less intensive use.

The new phones keep the momentum and energy going and also bring new features to early adopters. But it’s this long tail of older devices that really showcases the power of the Apple ecosystem.