When people ask us for advice on choosing a computer, the same questions always come up, including the one regarding the use of the device: most of the time at the workstation or in a mobile situation. The answer also conditions another question, which is the choice of screen size. If the device is to be carried on a regular basis, a maximum size of 14 inches is required.

This is not the opinion of LG, which offers a PC line called the LG Gram. We found them aptly named when we picked up one of these models that we would gladly take with us, as the weight of the device is minimal compared to the size of the screen. We are going to discover the LG Gram 16 that we had discovered on the screen when Windows 11 arrived.

The device comes with its 65W power supply that connects through one of the two USB-C Thunderbolt ports. The matte black magnesium alloy hood is inconspicuous and doesn’t seem to easily retain fingerprints.

Below the device, small holes on either side will deliver the sound and the equally inconspicuous air intake aligned horizontally along the device will take care of the cooling. 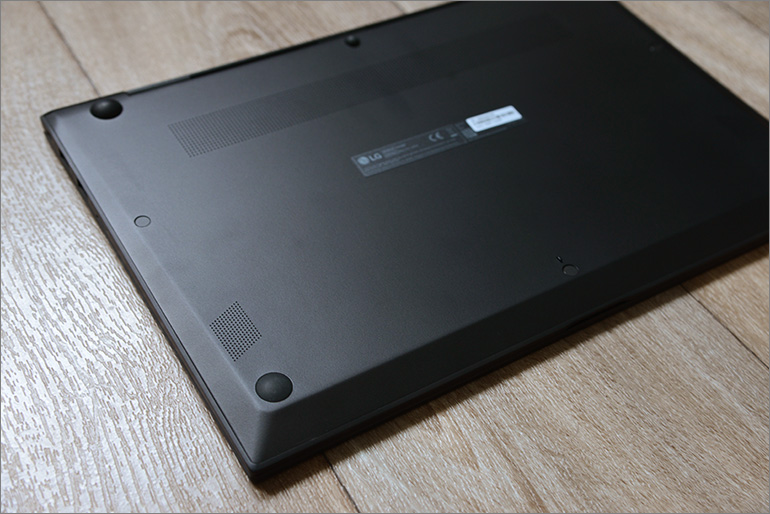 In addition to the Thunderbolt ports, there is an HDMI output and an audio mini-jack on the left. 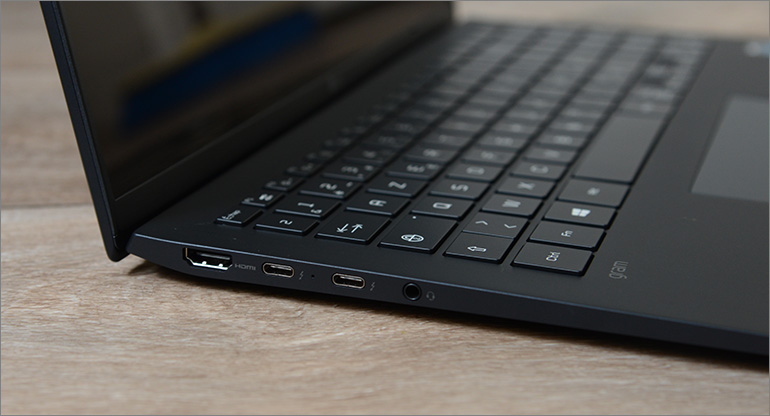 On the other hand, the Kensington notch will ensure that you can protect the device against envy which is sure to attract the beautiful appearance of the device. Two USB 3.2 poles will accommodate peripherals and the card reader for MicroSD models. 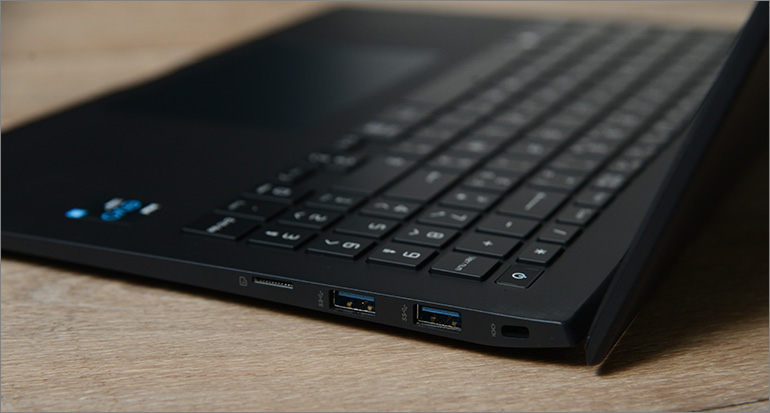 When you unfold the device, you discover a rather nice large trackpad and a keyboard with a numeric keypad, which is quite rare on laptops, but the 16-inch screen size makes it possible here. 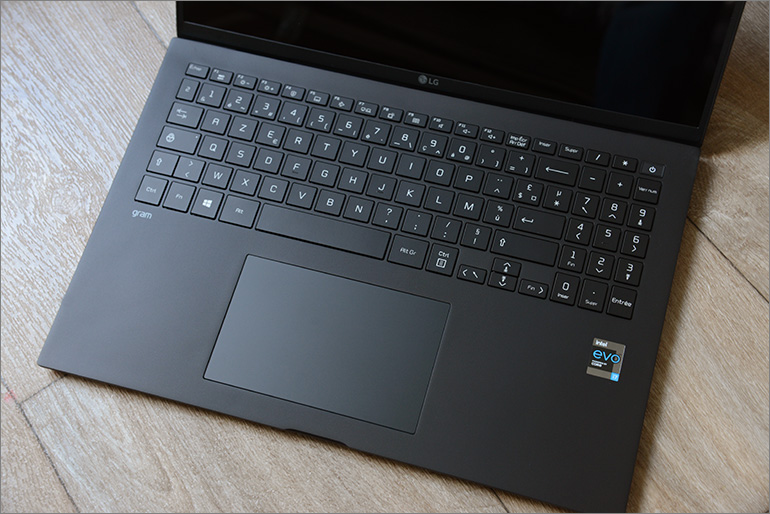 The typing is a bit dry, but we quickly got to the keyboard layout with its well-spaced keys. LG also provides an accessory that we are not used to seeing, a very thin and stretchable plastic or silicone coating that is placed on the keyboard. This optional accessory surprisingly softens the blow, but spoils the aesthetics a bit. However, it will have the advantage of protecting the keyboard from dust and other objects or liquids. 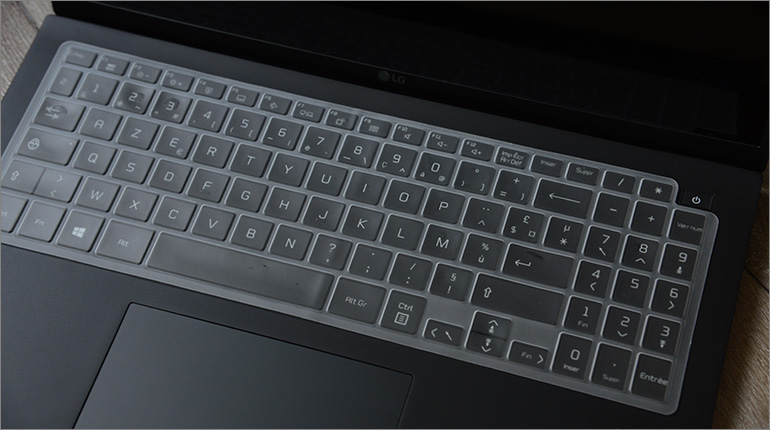 The only key that is not covered is that of the power supply which also hides a fingerprint reader. The 2-level backlight is controlled by a function key. 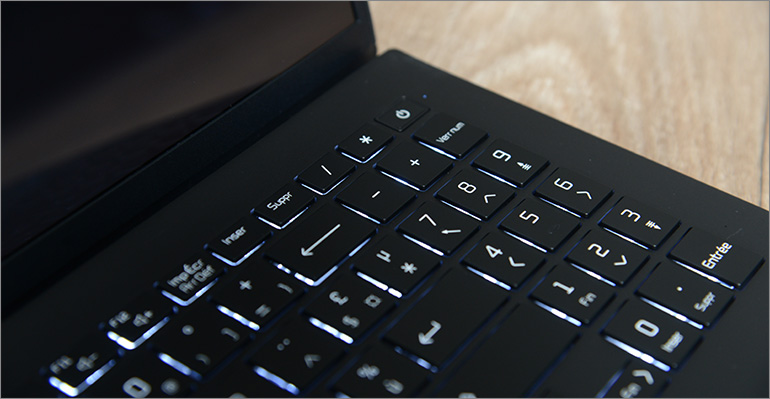 After our little photo session, when transporting the device to our workspace, we realize that the size of the object is not really in relation to its weight. Holding this 16-inch machine with one hand is effortless while the frame remains perfectly rigid.

Windows 11 is already pre-installed, the LG Gram was in fact one of the first laptops to natively adapt to Microsoft’s new operating system. LG has tastefully customized the interface with a wallpaper and some touches of pink as an accent color. The 2560 x 1600-pixel IPS panel display is flattering, but the glossy coating on the screen tends to dazzle. We appreciate the delicacy of the edges even in the upper one that houses the webcam. 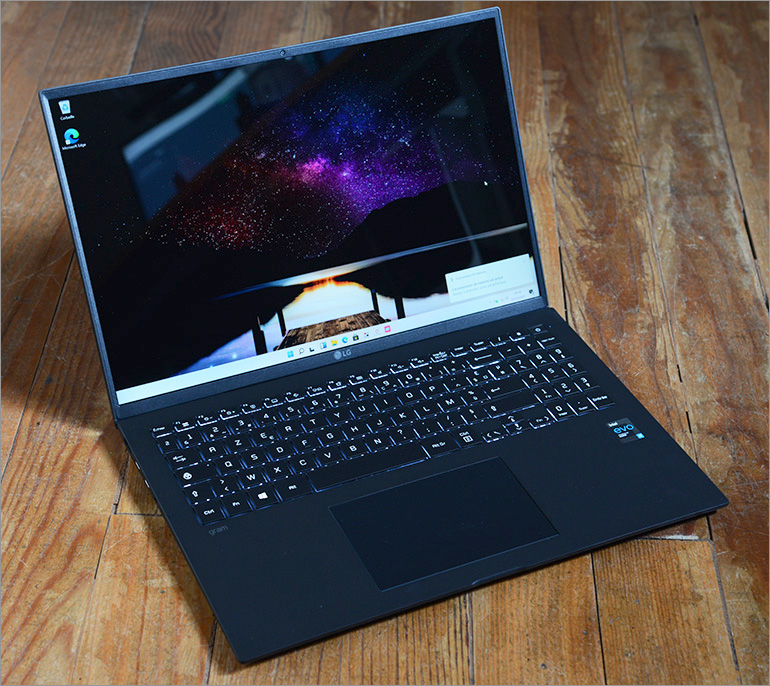 The first clicks on the system to start and update the device already show that the 11th generation Intel Core i7 is responding. These are the benchmarks to come that will speak best. It will also be interesting to see if the autonomy is there with our usual streaming reading test.

At the software level, LG added three additional programs to the list of default shortcuts on the taskbar. The first is “LG Control Center”, which offers access to settings in a rather nice interface. We appreciate being able to change the cooling mode quickly, for example to silence the fans, even if they are not very loud even when using the processor. 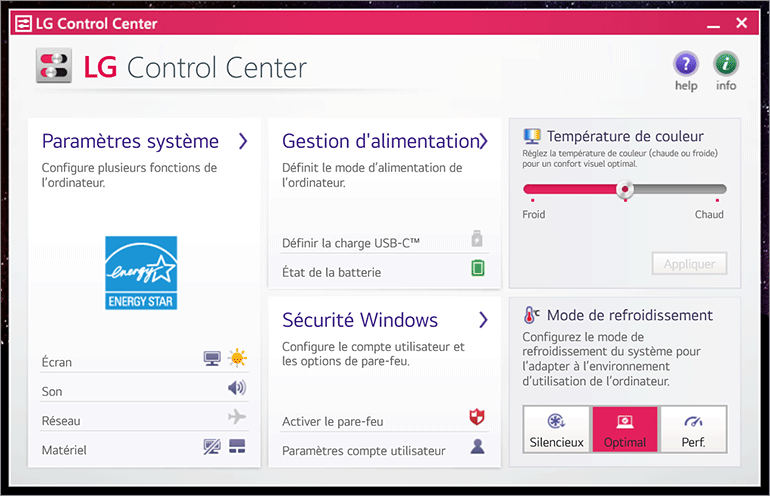 A separate software takes care of hardware updates, while this functionality could have been integrated into the LG Control Center, but it has the merit of existing and can prevent the user from searching for a driver on the official support page. Finally, Virtoo, offers to link your Android or iOS smartphone to PC to control the device from your computer. 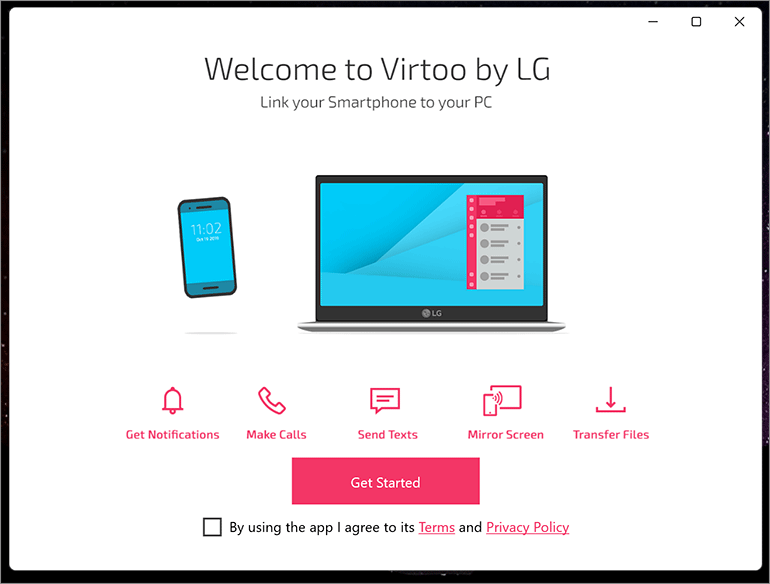 Daily use allows you to check that the reactivity is there for all kinds of tasks. The benchmarks confirm that the manufacturer was able to take advantage of the Intel Core i7 1165g7 since, with a score of 2312 points, it does slightly better than all other equipment tested with the same processor. This power level matches that of the latest 16-inch MacBook Pro also shipped from Intel. With Geekbench, the single-core score is 1528 versus 4973 on multicore and 18535 at the GPU level. 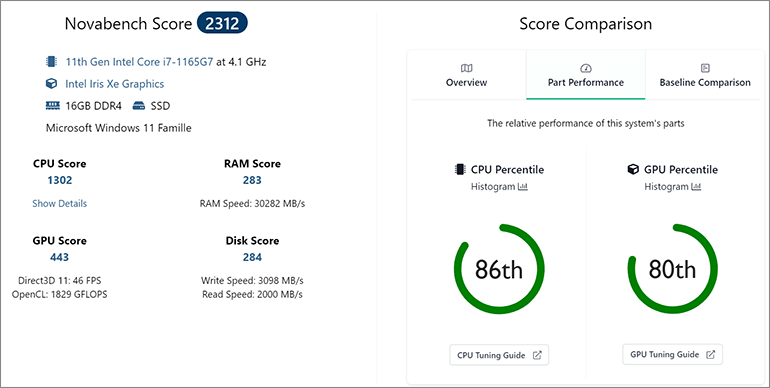 Has LG chosen to prioritize power to the detriment of autonomy? To answer this question, we ran our usual battery life test, with the computer connected to Wifi, the brightness set to 50% and the audio to 40% to watch a Netflix series until the battery is depleted. By the way, we noticed that the sound is not very powerful, however we did not expect miracles as often happens with laptops.

In the end, our LG Gram 16 proved to be more durable than we expected given the size of the screen and its power. It took him almost 11 hours to lose the right. A more than good autonomy when working or playing away from a power outlet.

Therefore, at the power level we have a computer that is placed at the same level as the 16-inch Apple under Intel, still on sale despite the arrival of the version under Apple M1. For additional power below this size while maintaining a reasonable price, it will be necessary to turn to the MacBook Pro M1 or the Huawei Matebook D16 under AMD Ryzen 5, with a poorer autonomy, but which has the advantage of being offered at an ultra-competitive price. .

It is perhaps this point that constitutes the biggest flaw of our LG Gram 16: it is offered at a fairly high price. Shown at 1699 euros at the time of writing this test, its price could be a drag for many users. Low audio power, though to be noted, is not a crippling flaw for a laptop.

On the other hand, those with the budget can rejoice. They will enjoy an extremely light device with a flattering screen, as well as a comfortable keyboard that includes a numeric keypad. The icing on the cake, it is powerful enough to handle most tasks that do not require a dedicated graphics card and, above all, it offers autonomy worthy of good students with smaller screens. If LG’s goal was to reconcile 16 inches with mobile uses, it achieves it perfectly with this LG Gram 16.